Frederick Garling and a Tale of Two Ships Named 'Success' 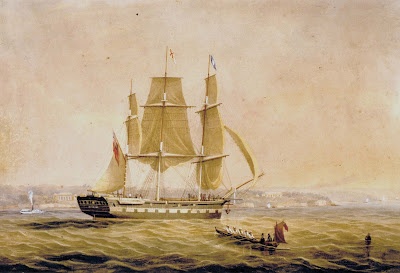 The wonderful painting shown above is of the ship Success when she was an emigrant ship, and was created in 1849 by the noted marine artist Frederick Garling. Behind this wonderful work lies a fascinating tale of artistry and coincidence.
Frederick Garling, Jr. (see portrait below and to the right) was born in London 1806, the son of Frederick Garling, a solicitor. The Garling family arrived at Sydney in the ship Francis and Eliza in 1815. His father had the distinction of being the second solicitor admitted to the practice of law in Sydney.
From an early age Frederick's passion was painting. He showed such promise as a landscape artist that in the 20-year-old was chosen to accompany Captain James Stirling on an expedition to the Swan River on the west coast of Australia. Its purpose was to explore the region and assess its suitability as a site for a new British settlement. Garling was brought along to serve as the expedition's official artist.
Stirling had entered the british navy in August 1803, and made lieutenant in August 1809. In January 1826 he was given command of HMS Success, a brand spanking new 28-gun frigate. The following December he suggested that taking possession of the land on the west of Australia near the Swan River would provide England a trading advantage. The mission was approved and in January 1827, HMS Success sailed from Sydney for the Swan River. Among her passengers were the Colonial Botanist Charles Frazer and the surgeon, Frederick Clause. The expedition explored the area in detail and at one point Garling accompanied Stirling and Fraser as they climbed Mount Eliza, becoming the first Europeans to do so. Garling recorded it all with his wonderfully detailed landscapes. 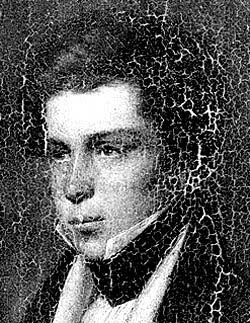 In December 1828 Stirling was made Lieutenant-Governor of the new colony and formally founded the city of Perth. HMS Success returned to Western Australia under a different captain in 1829 and wrecked on Carnac Island. She was refloated, repaired, and returned to England.
Following his adventures in Western Australia, Garling returned to Sydney and was appointed to a position in the Customs Office, in which he performed ably while continuing to paint. He married Elizabeth Ward in 1829 and they had seven sons and four daughters. But he was even more prolific as a painter than he was as a father. It was said that during his lifetime he painted most of the ships that arrived at Sydney over a period of 40 years. He lived in a large two-story house on Market Lane in Sydney and, according to one old timer, "could always be seen in the early morning sitting near an open window engaged on his work."
In 1847, Frederick was promoted to acting landing surveyor at Sydney while in the meantime working steadily as a port artist. One of his chosen subjects happened to be a 9-year-old, full-rigged emigrant ship that arrived at Sydney from Plymouth by way of Hobart, Tasmania, on December 17, 1849. She had on board 182 government emigrants, the bulk of whom were the family members of convicts who had been transported to New South Wales for various crimes.
Perhaps a smile creased Garling's lips when he saw her. This new Success was not that unlike HMS Success that Garling knew so well from his exploits 22 years earlier. Similar in rig and size, the false gun ports of the emigrant ship mimicked the real ones sported by Stirling's frigate. What Garling likely did not know was that six years earlier, in 1843, the emigrant ship Success had sailed to the Swan River colony, as as HMS Success had done. Odds are he also did not know that the ship Success had grounded on a sandbar, suffering a fate similar to that which had befallen HMS Success. Nor is it likely he was aware that when the emigrant ship voyaged to Swan River, she was then owned by Frederick Mangles, Captain Stirling's brother-in-law!
With watercolor as his chosen medium, Garling produced a beautifully rendered, high detailed portrait of the emigrant ship Success. In the foreground, one of the ship's long boats can be seen ferrying passengers to the ship, which appears to be getting ready to make way. A well-known villa at Eliza Point (now Point Piper) is visible in the background. The work is entitled: "The barque SUCCESS off Point Piper." This is interesting because the ship is clearly rigged as a ship, not a barque (or bark), which makes me wonder Garling if titled this work, or whether it was assigned later. Is is possible that Garling, whose passion it was to paint sailing vessels, and who as a customs official, must have spent a significant amount of time in and around ships, did not know the difference between a ship and a bark?
At this point I shouls explain, for the benefit of the landlubber, the difference. A bark, or barque, typically has three masts, with the fore mast (the one at the front of the ship) and main mast (the middle mast) being rigged with square sails, and the rear most, or mizzen mast, rigged with fore-and-aft sails. A ship also has three masts but differs from the bark in that all three masts are rigged with square sails. The 'ship' will also typically have an additional fore-and-aft sail on the mizzen behind the square sails, called a 'spanker.' Here is a graphic showing what I mean. Example 1 is a ship rig, 2 is a barque or bark, and 3 is a barkentine.

To an untrained eye, the presence of a spanker on the mizzen might result in a ship rigged vessel being confused with a bark. In the Garling painting, the square sails are clearly visible on the mizzen of the Success, telling us that without doubt she is a ship, not a bark.
Interestingly enough, not long after the Victorian government sold the Success in 1890 and she became an exhibition ship, she was rigged as a bark to allow her to sail again. Years later, in 1911, she was re-rigged yet again, this time as a barkentine, which mounts square sails on the fore mast only. So at one time or another, the Success sported all three rigs. But I digress...
One person who greatly admired Garling's painting was his boss, Colonel John Gibbes, the Collector of Customs for New South Wales. Gibbes bought a number of Frederick's paintings, including his portrait of the Success and left it, along with three others, in his will to his daughter, Frances Minto Ludlam of Newry, New Zealand.
Because Garling had a habit of not signing his paintings, many of them sat for years in various libraries and museums, either unidentified or misidentified, eventually to be "discovered" once they were properly examined by experts. Today Garling's works are highly sought after and exhibitions of his art are very popular. A few years Christie's auction house offered one of Garling's ship paintings for 39,341.28 British pounds, or almost $64,000, although others have gone for quite a bit less.
Frederick Garling died in Sydney in 1873, leaving behind a wonderful legacy of marine art, and our only glimpse of what the Success looked like as a full rigged ship, before her conversion to a penal hulk. His wonderful painting of the Success is a permanent part of the National Maritime Collection at the Australian National Maritime Museum in Sydney, Australia.
Over the years, the marked similarities between the two ships named Success caused endless confusion, so much so that when the Success went on exhibition, the first history written about her mis-reported the ex penal hulk as being Stirling's warship. Penned by Joseph Harvie in 1895, the book, which was sold on board, asserted that "In the month of June 1829 the Success was chartered by the British Admiralty to sail to Australia." Harvie was castigated by some Australians for the mistake, implying that he was intentionally misleading, but he wasn't the only one to make the error. The Western Australian Year Book for 1902-4 contained an illustration of the the exhibition ship incorrectly labeled "H.M.S. Success," and a photograph of the Ship Success, rigged out for her voyage to England in 1895, was hung up in the Perth Public Library .
I for one don't believe Harvie's confusion was intentional. Rather, it highlights the pitfalls facing those who study history.
(Picture credits: Frederick Garling's painting of the Success is reproduced here courtesy of theAustralian National Maritime Museum, from the collection of the Museum's USA Gallery. The portrait of Frederick Garling is reproduced here courtesy of the State Library of New South Wales.)
Posted by Rich Norgard at 12:10 PM

My Other Web Sites

A History of the Success

Lauched in 1840 at Natmaw on the coast of Tenasserim, in what is now Myanmar, for Calcutta owners, this teakwood vessel was as fine an example of native shipbuilding as any ever seen. Her dimensions were: 117'3"×26'8"×22'5", she displaced 621 tons, and was equipped with two decks, forecastle and poop, and square stern with single quarter galleries. She was given a scroll figurehead, to be replaced two years later by the female bust that became the hallmark of this fine vessel. The first 50 years of her remarkable career saw her performing in a wide variety of roles: trader, emigrant ship, coolie transport, and penal hulk. It was in this latter role that she gained much notoriety as one of five penal hulks anchored off Willliamstown near Melbourne, Australia, during the 1850s. During the remainder of her career she was towed from port to port as a show ship. During this period a succession of owners displayed her as a sort-of convict ship museum and with increasingly greater misrepresentation of her true history. After a successful exhibition tour of the British Isles from 1895 to 1911, she sailed to Boston. For the next 30 years she toured both coasts, the inland rivers, and the Great Lakes. During this time official representatives for Australia quietly - and unsuccessfully - petitioned the U.S. to have the exhibit stopped. Meanwhile, many millions took advantage of the opportunity to see this unique attraction. By the time she met with her rather sad end by fire in 1946, near Port Clinton, Ohio, she had earned a reputation, somewhat unfairly, as a hoax. In truth, the world lost the chance to preserve a superb example of 19th century shipbuilding. If you have any information about this vessel, please contact me at nauticalguy@hotmail.com. Also, visit my companion website at ShipSuccess.com.

Promote Your Page Too

Rich Norgard
I was born and raised in Port Clinton, Ohio, along the shores of Lake Erie. My Dad used to tell me about the “old slave ship” that burned offshore, less than half a mile from our home. When I landed my first job as a reporter and photographer for the local newspaper I began to collect information about that old slave ship, the historic sailing ship Success. This quest became first a hobby and then a passion and, finally, a writing career. I enlisted in the Army and retired after 20 years as a Chief Warrant Officer. I worked for another 15 years as an investigator in Alaska before returning to the shores of Lake Erie. My first novel, Trophy Kill, is a murder mystery set in Alaska. Work on my second novel will commence shortly as I continue to complete Heart of Teak, the history of the old ship Success. 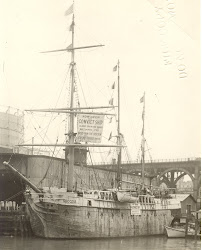 The Success at Chicago